Okay so the hours are long, the workload heavy, the time spent away from family painful; fortunately the work remains rewarding and wifie has not (yet) changed the locks on the front door.

Rice field and shack outside of Babahoyo, Ecuador.

As a Foreign Service Officer, I must explore the countryside, engage with people, and report on new things.  These are requirements that appeal however to Diplomonkey’s inner Viking’s wunder lust.

In recent travel to Ecuador alone, I have seen the snow-capped Cotopaxi volcano towering over the cloud line to shrimp and tilapia farms along the Guayas River to even Arabian pure breed horses in lush mountain pastures 3,000 meters above sea level (far removed from the burning sands of their origin in the Arabian peninsula). 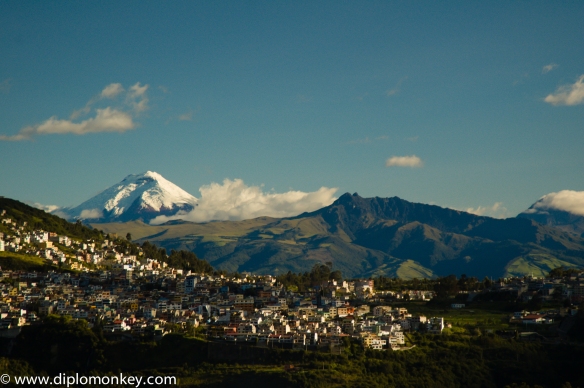 Bulls on up High.

At the same time, I have walked along the route that Francisco de Orellana took in the sixteenth century when he set out to explore and conquer the Amazon.  Pretty cool, but surreal nonetheless (can you say Indiana Jones).

Walking in the Footsteps of Orellana along the Camino de los Conquistadores.

Sanctuary of the Virgin of Guapulo and Convent – or simply the Guapulo Church.

Anyhow, it’s off to Texas and Florida again in a couple of weeks to look at cattle for export to South America.  In the meantime, to make amends while still in Lima I will make wifie a Chilcano with ginger syrup tonight.  For the more adventurous, the recipe follows.  Cheers from Lima.