Today is another one of those spectacularly, beautiful sunny days in Lima; that is above 2,000 feet – the FOG is again thick today, aarrgh…  So I was pondering this fine afternoon which of our latest dude adventures to write about. 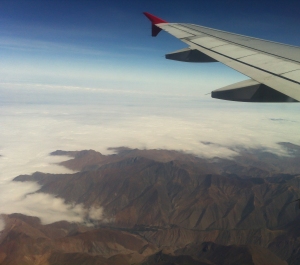 Do I write about our visit to downtown Lima to see the changing of the presidential guard (at Pizarro’s palace), or the Transformer street performer in Miraflores, or put together something on candid street photography?  All great subjects; maybe I could even throw in something on Peruvian ceviche for good measure. 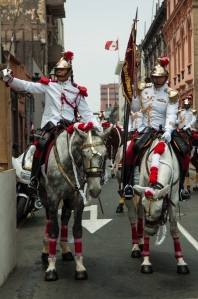 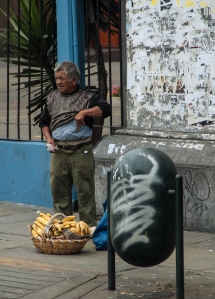 Okay, in the meantime Samster (Little Big Man) the budding NASA rocket scientist/astronaut comes by and asks: “Daddy, can we build a rocket when we go to Grandma’s house?”  This get’s me thinking.  Yes, there is hope; grey matter remains in the old noggin even after a week of writing briefing memorandum for not just one but two front offices and for good measure for headquarters back in Washington.

So Little Big Man and I break out that trusty reliquary of St. Jobs of Apple, yes the MacBook and start searching the Internet for the Estes V2 semi-scale model rocket (black and yellow paint pattern) that we decided on last week to build with Pop-Pop (i.e., Grandpa) during our upcoming R&R in Florida (going home for Christmas for the first time in four years – yippie).

YouTube comes to the rescue and we download a couple of the videos – really cool stuff you have to check out.  At the same time we come across also some videos of Steve Eves’s Saturn V 1:10 scale model rocket launch and of a homemade Blackbird SR-71 scale model with real working jet turbines.  These got a couple of “this is so awesome daddy” from my four year-old.

Although we have a big field in the back of U.S. Embassy Lima, not sure if they will let us shoot rockets off or attempt to fly jet turbine model airplanes despite the coolness factor.  I can just imagine what the neighbors would say of our pursuit to find blue skies.  Guess it would not meet the front page of Washington Post test either, so let’s pass and wait for a Florida launch.

So tomorrow we are off to Cieneguilla, in pursuit of some feet on the ground sort of altitude that will let us see blue skies.  Maybe we will stop at the itty bitty piggy restaurant along the way for a bite of spectacular spit roast suckling pig.  Let’s breakout the Nikon and go exploring!

Mountain pass outside of Cieneguilla.

Itty bitty piggy on a stick!

We had some truly spectacular weather this weekend in Lima, the first in a couple of months – yippee.  Birthday party and baby shower invites forced us however to stay near to home; so sorry, no wandering in the foothills of the Andes this weekend.  Instead we opted to do some science in our patio size backyard.  Yep, gone are the days of “oh Mr. Diplomat, your visa stamp is oh so sexy” – I have become a dad!

Trying to simultaneously teach a four- and a two-year old about planes and rockets is not without its challenges.  Fortunately, one of the things that made it to Lima House from Cairo House relatively intact was the science exploration box (with its science experiments, balsa planes, chemistry sets, baking soda and vinegar propelled rockets and the like, there is even a robot from the Smithsonian).

Our first order of business was to decide what type of rocket to design. Thanks to Google, research is a piece of cake. So the Diplomonkey design team of three highly trained and motivated engineers decided upon its own interpretation of von Braun’s Ferry Rocket (really cool concept, look it up). I am just amazed by the academic level of sophistication and preparation obtained at the pre-school level these days.

Okay, next we broke out the art supplies that we shipped from Virginia.  Armed with a ruler, some paper, and extra thick pencils in hand, the design team drew out our first dude-designed rocket ship.  The Samster finished off the schematics by drawing the exhaust blast.  I guess that Little Big Man seems to have gotten his inspiration from the YouTube videos we had seen the night before; he did comment, daddy, this is so awesome.  Why does David Bowie’s “Major Tom” come to mind? Mission to Mars next?

To test out the principles of aerodynamics, we snagged from the science box a couple of pre-cut balsa gliders that wifie, in her former life as a structured finance banker, had picked up as a give away at an energy conference.

Unfortunately transport of our household effects from Virginia to Cairo, followed by an evacuation that resulted in us not being there for the pack out, and subsequent shipment to Lima after ten months were not kind.  The construction and reconstruction engineer however broke out that wonder of repair tools.  Yes, the cyanoacrylate adhesive known to mankind as Super Glue!  And, of course, my fingers did get stuck together in the process – just part of the fun.

With the glider built and its broken wing and wing tip repaired, and now strengthened for all eternity, flight tests commenced. Three, two, one, blast-off. Our German short-haired pointer (call sign Bird Dog), who tried to eat our “bird” as it was reentering the atmosphere and attempting to land, played the role of the chase plane.

Trying alternative delta wing designs and materials, the team constructed other potential launch and re-entry vehicles from a processed wood pulp and cotton fiber product (yes, paper).  The design team had great success, and a good time.  In keeping with you know, the Nazca lines and the von Daniken thing, the rocket scientists celebrated with some Peruvian chicha morada. 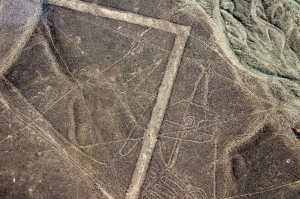 For those curious enough to try, the simple recipe just takes two to three ears of purple corn, three cinnamon sticks, 12 cups of water, a diced whole pineapple (you can even chuck in the peel), a diced green apple, a tablespoon of whole cloves, a cup of white sugar, and half a cup of lime juice.  Allow the ingredients to reach a boil then simmer on medium-low for about 45 minutes.  Cool and then serve.

Have a glass of chicha, enjoy the pictures (taken with my Nikon and iPhone), and think creatively.  For some of us tomorrow have to go back to work and write briefing memos.